Reset the net – Don’t ask for privacy, Take it back

A long overdue backlash against state spying (and NSA in particular) has some of the biggest websites on the internet joining forces with internet rights activists to unleash an unambiguous message. Don’t ask for privacy, take it back. 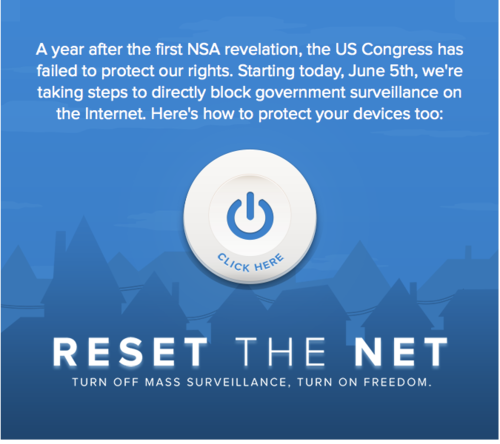 Internet website and application owners are encouraged to adopt strong encryption based security measures to prevent spying and spread awareness to more people. Here is are resources for various security measures against spying. It doesn’t get easier than this. Do it. The 5th of June will see splash screens raising awareness on sites participating in the campaign.

While the protest is against NSA and US policies, the internet is a world without boundaries, and I do believe that Indians cannot afford to remain disinterested. As power concentrates in fewer and fewer hands, greater resources are spent protecting it from all threats, real and imagined with scant regard for individual and privacy rights.

So I have decided to support the campaign even if it doesn’t protest Indian government (yet). As some of you may have noticed, all my blogs are now ssl enabled. This will continue. I will be using more security features, and perhaps share how you can get them too (since my ideas are n00b and wallet friendly, I imagine they may help some).

Edward Snowden, whose leaks on government spying became a massive last straw for many, has endorsed the campaign in a must read letter.

“One year ago, we learned that the internet is under surveillance, and our activities are being monitored to create permanent records of our private lives — no matter how innocent or ordinary those lives might be.

Today, we can begin the work of effectively shutting down the collection of our online communications, even if the US Congress fails to do the same. That’s why I’m asking you to join me on June 5th for Reset the Net, when people and companies all over the world will come together to implement the technological solutions that can put an end to the mass surveillance programs of any government. This is the beginning of a moment where we the people begin to protect our universal human rights with the laws of nature rather than the laws of nations.

We have the technology, and adopting encryption is the first effective step that everyone can take to end mass surveillance. That’s why I am excited for Reset the Net — it will mark the moment when we turn political expression into practical action, and protect ourselves on a large scale.

Join us on June 5th, and don’t ask for your privacy. Take it back.”

In other news, Google has released the code for its upcoming “End to End” Chrome plugin offering end to end encryption to prevent email spying. It is also intended to be an easy way to get secure communication for people at risk and thus will carry a burden of having to aim for usability as well as flawless security. The Chrome plugin is currently in the alpha state and Google has released it with an Apache 2.0 licence inviting hackers to find security flaws under its bug bounty programme.

Together with statistics released about the use of encryption in sent and received email via Gmail, Google’s message for today is powerful and straight.

Use encryption to communicate by email.

Other organizations supporting Reset the Net include Reddit, WordPress